The Consul and Zephyr were assembled at Ford New Zealand's Seaview factory in Lower Hutt from CKD kits. The large Fords were competed with the locally built Vauxhall Wyvern and Velox and, later the Australian Holden. When the newly crowned Queen Elizabeth II visited New Zealand as part of a Commonwealth tour in the early 1950s, she was pictured watching Zephyrs being built at the local Ford plant.

The Zephyr Zodiac (or Zodiac Mk I) was an upmarket version of the Zephyr launched at the London Motor Show in autumn 1953. It had two-tone paintwork, leather trim, a heater, windscreen washers, whitewall tyres, and spot lights. The engine had a higher compression ratio - 7.5:1 instead of 6.8:1 - increasing the maximum power to 71 bhp (53 kW).

There are no official records of Zephyr Zodiac convertibles being produced, but there were a few estate cars.

This three-litre model was quickly adopted by Ford New Zealand which had originally launched the Mk IV Zephyr assembled locally from CKD kits with the 2.5-litre V6 (no Zephyr 4 this time) and received complaints it was underpowered for a country where towing boats and caravans was common. Ford New Zealand also introduced optional floor shift and bucket seats as an alternative to the standard column shift and bench front seat and a large number of Zephyrs were built in this form, with other modifications, for New Zealand's traffic police.

The Zodiac was also again assembled in New Zealand with both bench and bucket front seats. Automatic transmission was optional with both the Zephyr and Zodiac. The local Mk IV line did not include the Zephyr Deluxe version available in the UK, was not as popular as the Mk III and was outsold by the now much wider locally built Australian Falcon range. Production ended in 1972 and the Consul and Granada replacements introduced in the UK were never officially imported into New Zealand.

Criticism of the handling of early examples in the UK led to the fitting as standard of radial-ply tyres on the larger-engined version in place of the more conventional (in the UK at that time) cross-ply tyres with which all versions were shod at the 1966 launch, and the retro-fitting of radial-ply tyres to early examples addressed the tendency of the rear wheels to slide uncontrollably in wet weather, justifying in the process Ford's investment in a new and relatively sophisticated rear suspension arrangement for the Mk IVs. Even after that a contemporary nevertheless opined that the ride involved a certain amount of 'float', and reported that the nose-heavy handling called for a 'strong driver', a problem which the more expensive Zodiac and Executive versions mitigated through the fitting as a standard feature of power assisted steering. Cost constraints precluded adding power assisted steering for the Zephyr, but during its production run the steering ratio was lowered which reduced the strength needed to change direction by increasing the number of turns between locks from 5.5 to an even higher 6.4. Another production modification for the 4-cylinder Zephyr involved redesigning the valve gear in order to eliminate the need on the early Mk IVs for frequent tappet adjustment

The size of the bonnet was emphasized by square cut styling of the wings. A practical use was found for some of the extra space in front of the driver: the spare wheel was stored, ahead of the engine, under the bonnet, freeing up space at the other end of the car for more luggage.

The Zodiac Mk IV and "Executive" had four headlights and an uprated 2,994 cc (183 cu in) V6 engine. Claimed output was 136 bhp 'net' at 4,750 rpm, with 181.5 lb·ft (246.1 N·m) of torque at 3,000 rpm. The Zodiac featured an alternator instead of a dynamo on the Zephyr, an adjustable steering column, a spare wheel in the engine compartment, a heater and Aeroflow ventilation, electric window washers, 2-speed wipers, a cigar lighter, rev counter, clock, ammeter, and reversing lights as standard.

In 1961, Ford began a complete redesign on the Zephyr, under the title of ‘Project Panda’. As the car used the new V-series engines, the then traditional long bonnet concept created a problem until design engineer Harley Copp required that the car was both larger and had more internal space, and came up with the idea of placing the spare wheel ahead of the radiator on an angle. The result was a vehicle of similar dimensions to the North American Ford Fairlane.

In November 1966 the manufacturers announced a plan to introduce an "export special" version of the Zephyr Mk IV combining the 3-litre engine of the Zodiac with other specifications largely following those of the existing Zephyr. This 3-litre Zephyr was not offered by Ford on the domestic (UK) market.

Automatic transmission (the Zodiac's four-speed manual box with overdrive being also available as a 'no cost' option) along with power steering and a sunroof were standard equipment. Other standard features included; fully reclining front seats, Walnut fascia, full instrumentation, carpeting throughout, reversing lights, fog lamps, front inertia reel safety belts, and a radio. The Executive was distinguishable from other models by exterior trim and name badges on the front and rear.

An automatic transmission Ford Executive was tested by Britain's Autocar magazine in 1967. It had a top speed of 100 mph (160 km/h) and could accelerate from 0-60 mph (97 km/h) in 13.1 seconds. An overall fuel consumption of 17.2 miles per imperial gallon (16.4 L/100 km; 14.3 mpg-US) was recorded. By these performance criteria, the Ford betrayed its weight, but nevertheless usefully bettered the similarly sized 3.3-litre-engined Vauxhall Viscount. The Ford's recommended retail price of £1,567 exceeded the £1,483 sticker price on the Viscount.

The Zephyr/Zodiac Mk IVs with their complex independent rear suspension design represented a considerable step up when compared to the Mk III big Fords which they replaced. Ford also determined to widen the price gap between the Zephyr and Zodiac version. In January 1967, less than a year after the car's introduction, it was announced that production of the Mark IVs was being cut back in response to poor sales. The announcement was accompanied by several pieces of more upbeat news about Cortina sales, and it was stressed that workers taken off Zephyr/Zodiac production would all be redeployed on the Cortina production lines.

An estate version of the Zodiac Mk IV was announced at the same time as the Zephyr equivalent, and built alongside it at Farnham. There was no "Executive" estate.

The "Executive" was an upmarket version and had the highest specification offered by Ford to UK customers in the 1960s.

The History of the Ford Zephyr, Zodiac and Consul cars:

Although large, the car, at least in its Zephyr form, was not particularly luxurious. Individual front seats were available at extra cost, but the standard front bench-seat was described by one commentator who ran the car on a long-term test as being intended for people no taller than 5 ft 8 in (1.72 m) who have the right leg 3 inches (8 cm) shorter than the left.

An estate version of the Zephyr Mark IV was announced just in time for the London Motor Show in October 1966, though deliveries commenced only in January 1967. As with the earlier Zephyrs, volumes did not justify tooling up for estate production at the Dagenham Plant, and the cars were instead built by E.D.Abbott Ltd of Farnham, based on part finished saloons received from Ford. The Mark IV Zephyr estates (like their more expensive Zodiac siblings) came with black vinyl covered roof, a fashionable distinguishing feature of upmarket vehicles at the time: retention unchanged of the saloon's rear light clusters attracted criticism, however, because of the way it narrowed the rear hatch opening at floor level when compared to the arrangements on the cheaper Ford Cortina Estates. 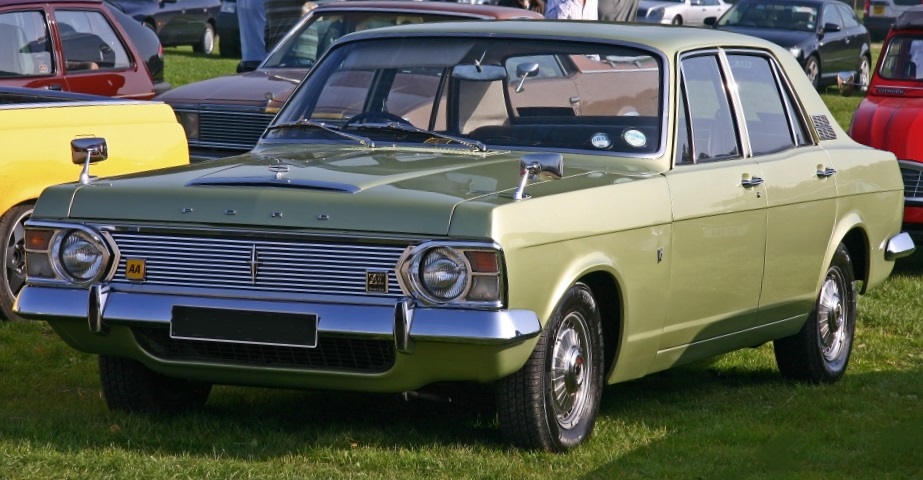